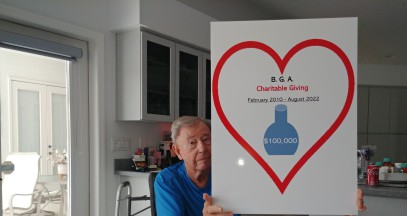 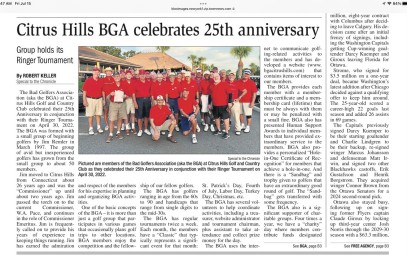 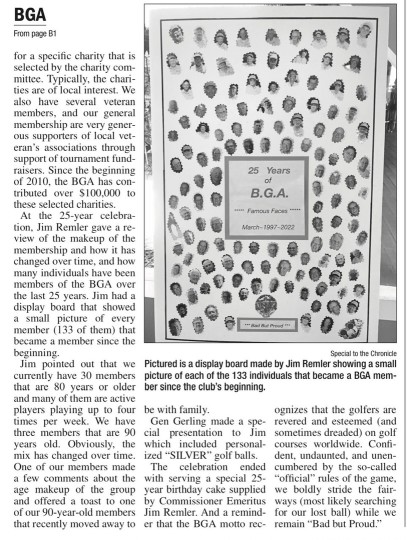 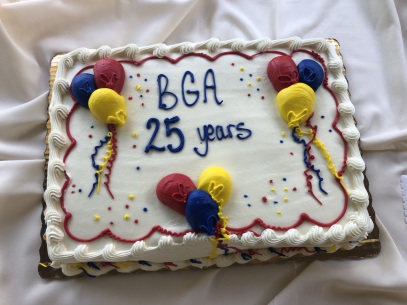 Jim Remler's creative kindness showing all BGA Members since his founding of the BGA in 1997. 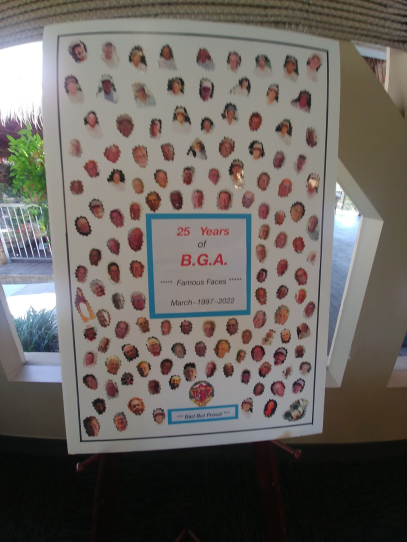 More of Jim Remler's creative dedication over the years. 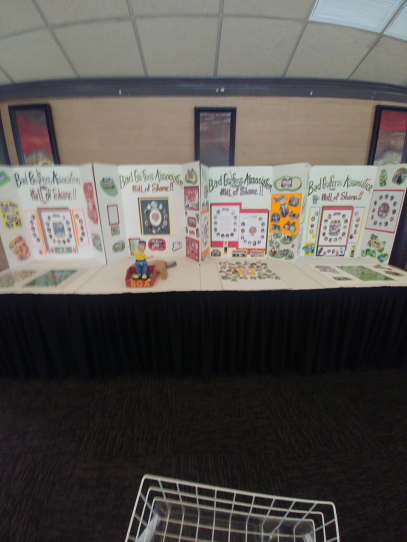 Jim Remler receives a BGA gift from Ken Gerling for his 25 years of leadership, dedication and kindness as Commissioner of the BGA. 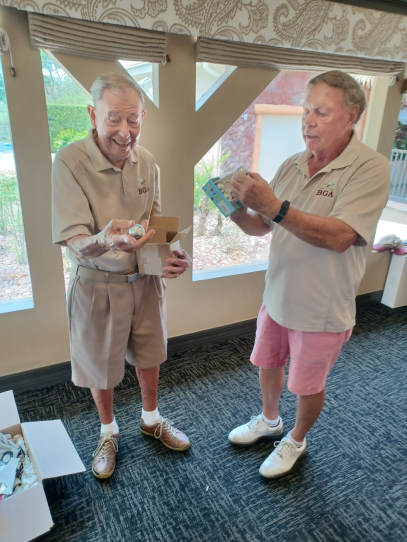 The Commissioner Emeritus and the gift. 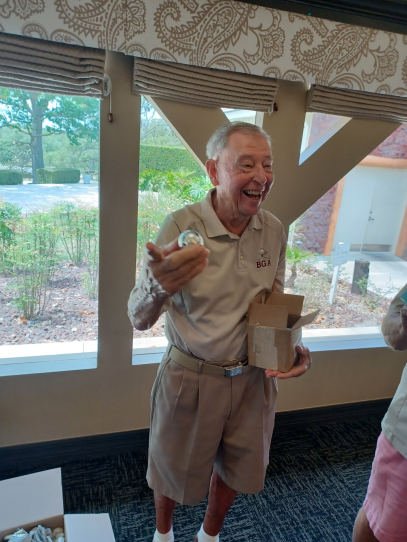 From: BGA Commissioner W. A. Pace.

BGA members, the Annual Ringer Classic Tournament and the 25th BGA Anniversary Year was Celebrated on Friday & Saturday April 29-30 with a luncheon on Saturday, April 30, 2022.

There was a cake decorated to recognize the 25th anniversary.  CHGCC catering then served cake to everyone.  So, all had the opportunity for a double-dose of sugar.

Sol Asekun announced the scores and the overall Ringer trophy.  Jerry Pequeen and Ken Gerling were the overall winners and they were awarded the trophy to keep for the next year.

We had 7 members attend the luncheon that were not able to participate in the tournament.  Clint Wynne, John Keller, Paul Piotte, Paul Foss, Curt Mesler, Len Ciriello and Henry Huntsberry attended the luncheon.  It was really good that they could all attend.

It takes a number of volunteers to run the BGA.  Several years ago Jim started the practice of recognizing extraordinary efforts on the part of several of our members.  The extraordinary efforts include things like collecting prize money and taking attendance each play date, hosting our annual Family Picnic, maintaining the BGA website and communications to our members, coordinating our charitable giving activity, printing score cards and keeping track of prize money for daily games during the pandemic, and generously contributing funds.  I surely will have missed someone but no intention.

At the Ringer/25 Year celebration we presented 3 Human Support Awards.  They went to Curt Mesler, John Keller and Peter Bockiaro.  All have been helpful in many ways.  But the most important part is that each of them have volunteered to collect the prize money and take attendance each and every play date.  All have come early each play date to check the play list, take attendance and collect the prize money. Curt, John and Peter have been added to the Human Support Awards page at www.bgacitrushills.com.

Jerry Pequeen arranged a toast to Joe Skender.  Jerry brought a bottle of Polish liquor (at least I think that is close) that was offered at Joe's 90th birthday celebration,  Jerry brought some "shot" glasses and poured the liquor for all that would like a shot.  Jerry made some very nice comments about Joe and the BGA and then Jerry led a toast to Joe.

The program was turned over to Jim.  Jim prepared a poster board that has a photo of all past and present BGA members (plus 3 other non members).  Jim gave background on how he went about putting the poster together.  Jim then spent a few minutes describing some of the highlights of events that had taken place.  Some that I remember, was the date of the formation, how many were involved, how it grew over time, first classic tournament, etc.  He covered our charitable giving, when BGA certificates were first issued, when we began "hole in one" certificates, when we began Human Support Awards.  He also gave some statistics on the age distribution of our members and how it has changed over the years.  I know l've missed some.

Clearly, those in attendance enjoyed this part

This was followed by a special presentation to Jim.  Ken Gerling was the presenter.

A box arrived from Grand Cayman (arranged by Hose, I believe).  Ken proceeded to tell how the box was arranged, how it was shipped, etc.  The box was wrapped in silver paper and cost $75 to ship from Grand Cayman.  Inside the box were a number of "previously owned" golf gloves to cushion the box that was inside the first box.  Ken and Jim had some difficulty opening the outside box as well as the box that was inside the first.  Persistence paid off.  Inside the first box cushioned by all the golf gloves was another.  Inside that box was a dozen (new) Silver golf balls with JR on them.  Ken did a tremendous job of presenting the golf balls.  Oh yeah, inside the box was a card that had been signed by many BGA members.

Finally, the Barkies, led by the head Barkie (Ed Ryan) sang the BGA song.  From my memory the other Barkies were Sol, Peter Bockiaro, Dennis Kudla.

That is all folks.  Trying my best to summarize.