The Bad Golfers Association was founded in the northeastern United States in 1963 by three golfers Phil Oliphant, Andrew McMeel and John McMeel who loved the game of golf. From these founding fathers many BGA Chapters have formed over the years in various sections of the United States. Jim Remler put seven golfers together to form a BGA Chapter in Central Florida. This BGA Chapter played its first BGA Tournament Classic in March of 1997 at the Citrus Hills Golf and Country Club in Hernando, Florida. This was the beginning of this BGA Chapter that has grown to over fifty members with several alternates waiting to become full members. Every Monday and Friday one will find approximately 40 BGA golfers wandering the fairways of The Oaks or The Meadows golf courses at Citrus Hills Golf and Country Club. These BGA golfers will enjoy both a round of golf and fellowship playing many types of games including whack & hack, sucker in the bucket, yellow ball, match play, team point quota and more. This diverse group of BGA golfers, with handicaps from 7 to 33, has all kinds of "Stuff" available as follows: 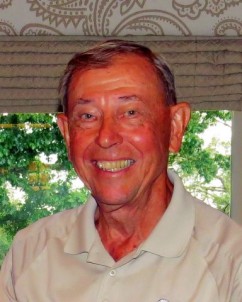 This Patriotic Poster, prepared by Commissioner Emeritus Jim Remler,  represents the Bad Golfers Association support for our Troops World wide. The BGA outwardly demonstrates its support the last Friday of each month by pledging the Allegiance to the U.S.A. Flag followed by singing  God Bless America.

The BGA also supports community functions by participating in Veterans activities through out the year. 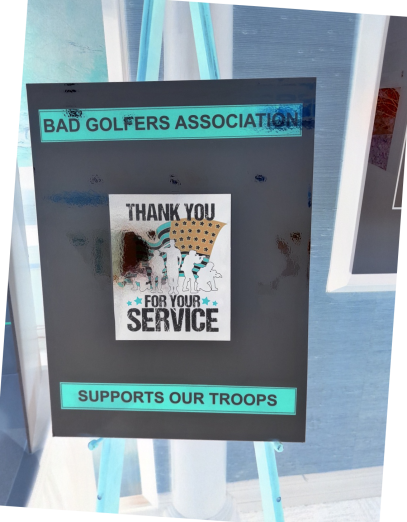 This history was authored by

along with input from other

All edited & approved by

The Bad Golfers Association (also known as The BGA) in Citrus Hills Golf and Country Club celebrated its 20 year anniversary in March 2017 with a special golf tournament and a dinner dance attended by both members and their wives and/or significant others.

Twenty years ago a small group of beginning golfers formed The Bad Golfers Association in Citrus Hills. The group, organized by Jim Remler, consisted of Jim Remler, Harold Burley, Ed Colborn, Dick Hensel, Jack Davis, Sam Whiting and a few others. This informal group of avid but inexperienced golfers has grown to a current membership of over 50 regular members. Jim Remler, as founder, has been the leader since it was formed. The BGA is more than a golf group that enjoys playing golf but also enjoys the fellowship after each round. Family members are included periodically through the annual BGA family picnic, dinner dances and a Ladies Day tournament that include the wives and/or significant others.

The BGA has golfers ranging in age from mid 50s to early 90s and handicaps that range from single digits to the low 30s.

The BGA has regular tournaments twice a week and occasionally coordinates travel to other local golf courses and an annual two/three day event at other courses a little further away. Each month the members have a "special tournament" that typically represents a significant event for that month. For example we have a Turkey Day, a Santa Claus Day, a Fourth of July , etc.

The BGA is a patriotic group with several members having actively served in the military. On the last Friday of each month, BGA members all wear red shirts to honor our troops. We pause to Pledge Allegiance to our flag and typically sing a patriotic song before we go out to play that day.

The BGA is a significant supporter of charitable groups. Four times a year we have a "charity" day where members contribute funds designated for a specific charity that is selected by a charity committee. Typically the charities are of local interest and include, among others, the Blessings in a Back Pack, Daystar, and the Thanksgiving Feeding Alliance and CASA. Several Members also help support Sunny Shores Sea Camp golf tournament that raises funds for Cystic Fibrosis patients and their families. Since 2010 the BGA has contributed over $58,650.00 to various charities.

A few words about the founder and leader of the BGA. Jim Remler moved to Citrus Hills 20 years ago from Connecticut. Jim was involved in education and prior to retirement was the Principal of a middle school in Wilton, Connecticut. Jim recently celebrated his 81st birthday. Jim has 3 hole in ones to his credit and has shot his age on several occations. This is remarkable given that Jim did not play golf prior to retiring. Jim takes a lot of good natured kidding from our members about his tenure as a school administrator. Jim does an excellent job planning and organizing BGA activities and is highly respected by the membership. Supporting Jim are a number of BGA members who assist in making the daily golf matches run smoothly. They include Paul Piotte, Clint Wynne, Sol Asekun, Ray Boudreau, W. A. Pace and several others who volunteer on special occations to make the BGA  the best run group at Citrus Hills Golf and country Club.

Members of the BGA are presented with a membership certificate and a lifetime membership card that must be carried with the individual at all times. At any time members can call for a membership card check and if a member does not have the card a $3 fine is imposed. The BGA is famous for the imposition of the $3 fine. The $3 fine is also imposed for not wearing a red shirt on the red shirt date, and for arriving late for our tee time. The BGA also has several other awards including awarding certificates for a hole in one, the "sandbag" award that goes to the individual who has a net score below 60, the Turkey Award, the Mickey Mouse Award, the Hot Dog Award,  and the Ground Hog Award.

The BGA motto recognizes that our golfers are revered and esteemed (and sometimes dreaded) on golf courses worldwide. Confidient, undaunted, and unencumbered by the so-called "Official" rules of the game we boldly stride the fairways (most likely searching for our lost ball) while we remain "Bad but Proud".