We are all asked to arrive 30 minutes prior to our tee time. If we are late (without a phone call) it is a crime, and the penalty is a $3.00 fine. The BGA effort is to stop crime, and keep Members from being late. Or, being guilty of other crimes, as determined by The BGA Commissioner. "Do the Crime - Pay The Fine." 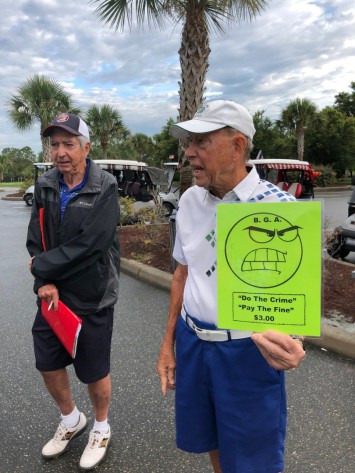 Commissioner Pace lost his BGA towel today Monday, May 24. The lost towel was returned and the Commissioner did the crime and paid the fine. The BGA treasury is three dollars richer. Thanks to the commissioner. 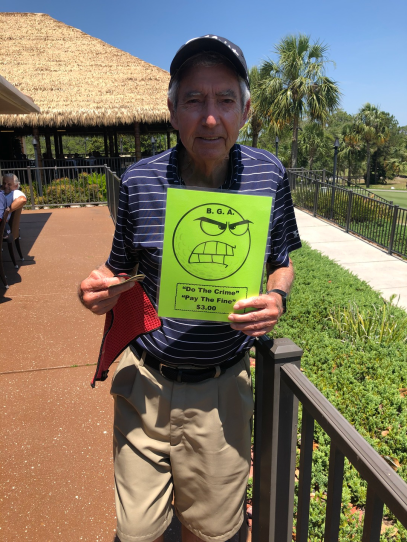 Peter Bockairo commits his 6th crime and takes over first place in the BGA’s Do the Crime & Pay the Fine program. 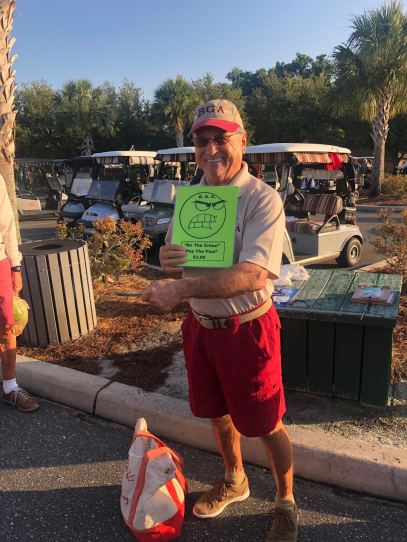 Buzz pays his fine for forgetting he signed up for the RyderCup 2021. 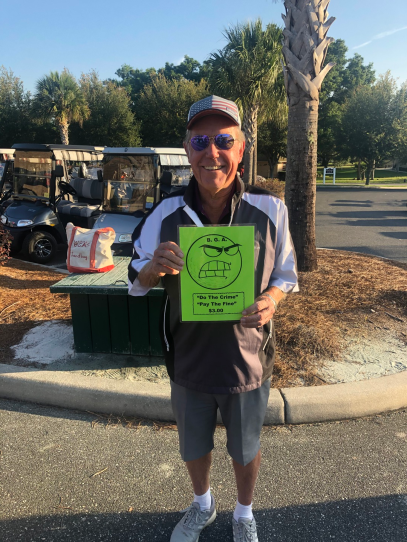 Fines keep mounting up. A first for Dave Beck. Number 5 or 6 for John Erdmann. John is on pace for the fine record. 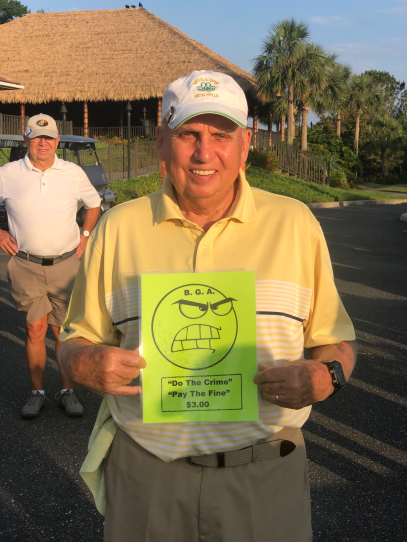 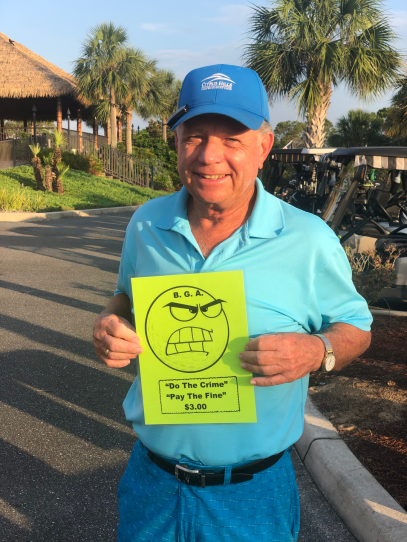 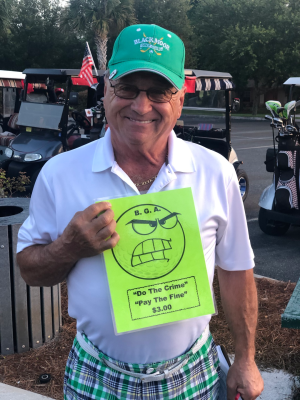 BGA members, a photo of Jim Pachmayer (aka Paco) with the do the crime, pay the fine card.  Paco was very late for golf on Monday May 3, 2021.  Fessed up and readily paid his fine.....(per-W.A.Pace) 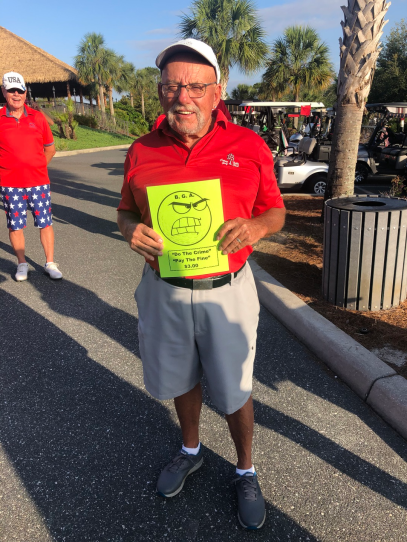 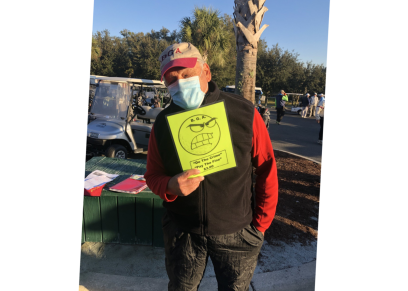 Rennie Anllo forgot his Red Shirt so he Did The Crime and Paid The Fine. 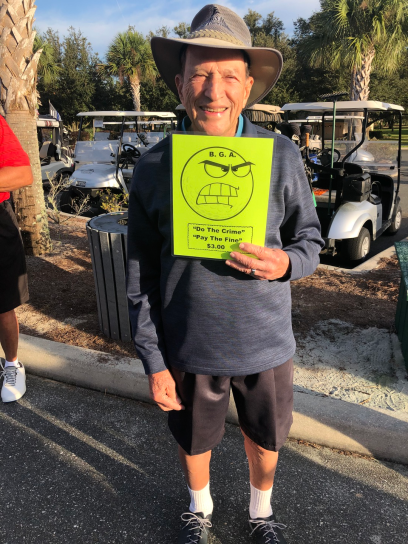 Henry Huntsberry was late so he paid the $3.00 fine. 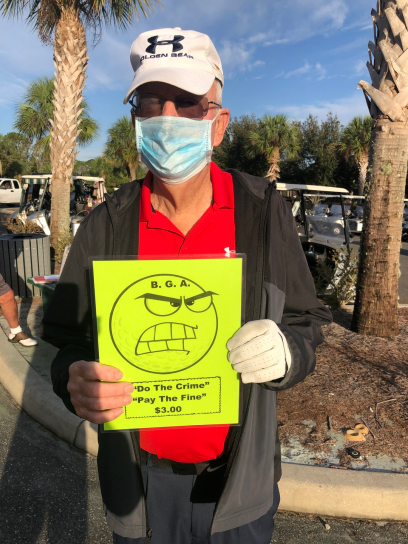 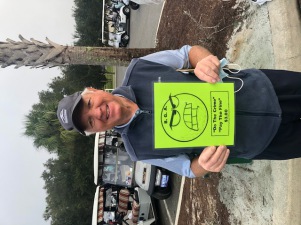 All right John Erdmann, set the alarm, late is a Crime. Pay the Fine. November 2020. 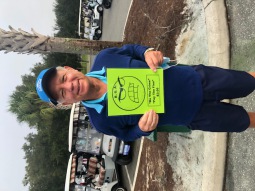 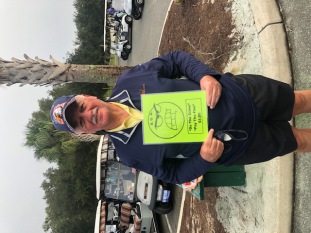 JIM REMLER LOST HIS VERY OLD AND SENTIMENTAL BGA TOWEL LAST WEEK.  IT WAS FOUND TODAY, 10/12/20, AND RETURNED TO OUR COMMISSIONER EMERITUS.  JIM REMLER STEPPED UP AND CLAIMED HIS VERY OLD TOWEL ($.99 value), AND PAID THE $3.00 FINE TO GET IT BACK.  DO THE CRIME - PAY THE FINE. 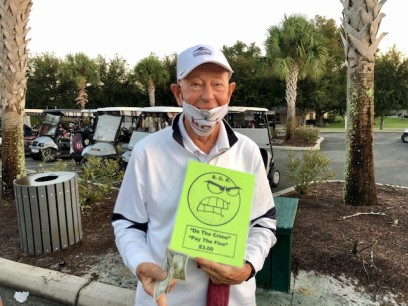 Paul Rundio was only a new BGA Member for about one minute before he was fined $3.00 for the Crime of not arriving 30 minutes prior to tee time. Do the Crime, Pay the Fine. 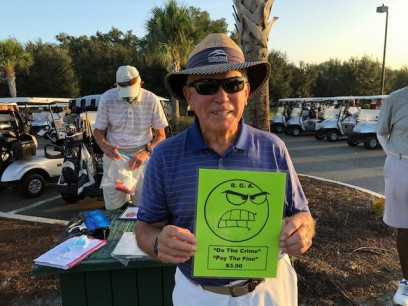 Rennie Anllo and Bob Feldberg no Red Shirt August 7, 2020. Pay The Fine! (That looks red enough to me Bob. Suggest an appeal!) 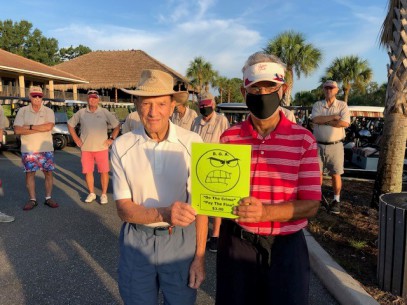 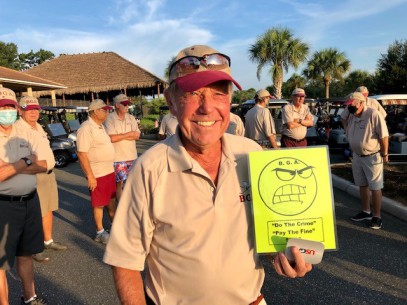 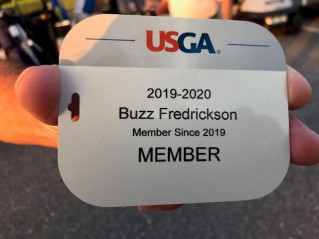 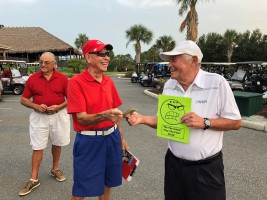 Well, looks as though Neil Messina set a first today when he did the crime. He had his BGA Hat and Shirt on when it was a BGA Red Shirt Day!  So, Do The Crime and you will Pay The Fine. 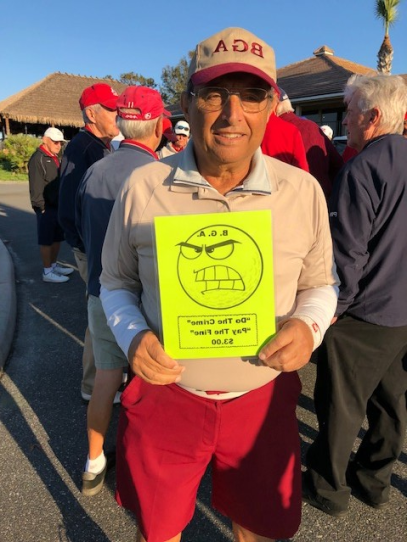 Steve Keen shot a net 59 on Friday, October 25, so he was awarded the Sandbag, BUT, Steve did not disclose his score! Therefore he was guilty of "The Crime" of non-disclosure. Fined $3.00. "Do the Crime Pay the Fine". 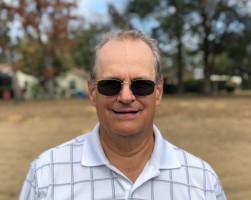 Mike Rizzio and Buzz Fredrickson, GUILTY as charged today by not wearing a Red Shirt on the last Friday of the month. Do The Crime - Pay The Fine Mike and Buzz. 8/30/19 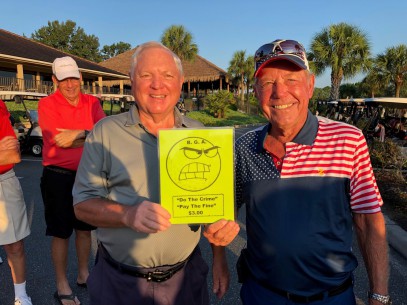 CHARGED:  FAILURE TO EMBRACE AND PROTECT THE MICKEY MOUSE AWARD, IN THAT HE LEFT PART OF IT BEHIND. August 12, 2019 "Do The Crime - Pay The Fine." 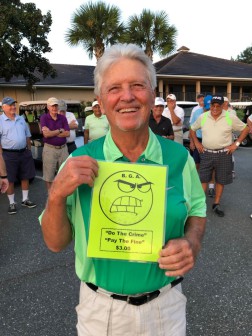 THE TOWEL WAS FOUND AND RETURNED. 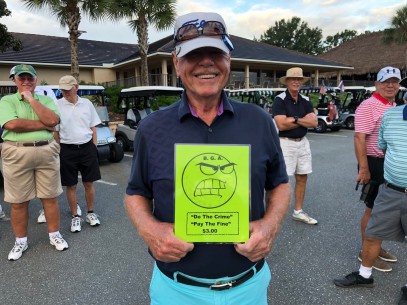 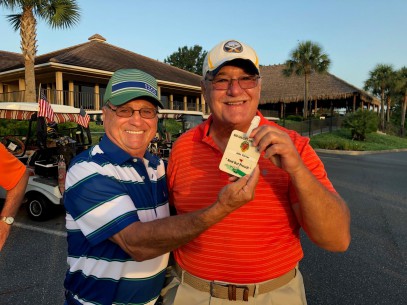 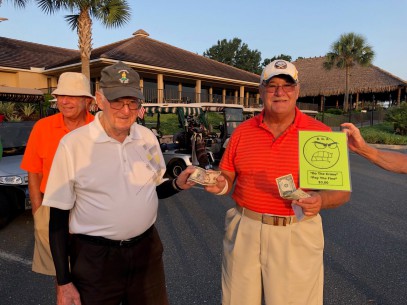 On June 7, 2019, two BGA Members became the first to be guilty of the Crime, being late for  tee time arrival. 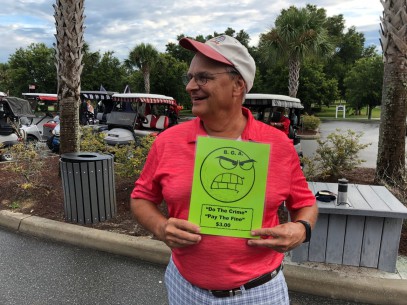 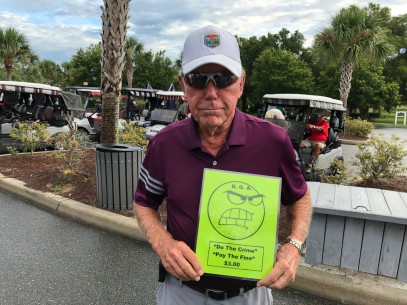 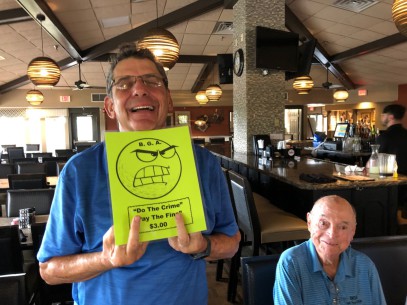